Setting goals that our brain likes

For goal setting to work, we have to set goals that our brain will like. The reason we do almost anything is because dopamine is released in anticipation of a reward for our action. If the reward is big enough, we will do anything to get it. Competing with this reward though are stress, anxiety and fear. If these outweigh the reward, our brain will hesitate. So when setting a goal, it helps to know how certain parts of the brain work to determine if they like it or not. There are a few hacks to make a goal more appealing for the brain. 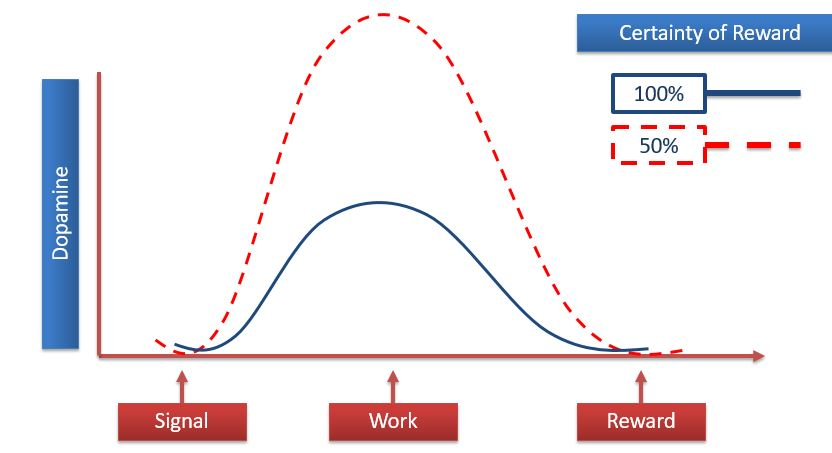 Our goals usually focus on achievements rather than habits or identities

Putting a set of achievements in front of us can put fear, anxiety and stress in front of us. There are two options in our mind, success or failure. Dopamine signalling motivating us to chase the reward can be overridden by amygdala signals telling us not to do it as the possibility of failure triggers too much stress and fear. Certain parts of the mind and body will be turned off, while others will be turned on. We can feel irritable, aggressive and highly competitive in pursuit of these goals. The fear of failure can create extreme, but unsustainable levels of motivation. To avoid putting our mind and body through such intensity, we opt not to set goals.

There is an alternative to avoiding goals altogether. Goals don’t have to focus on achievements, they can relate to our habits e.g. spend more time with positive people. We are more in control of our habits than we are of outcomes. The fear of failure is removed, while the reward remains in place. If we track and identify progress, the positive feedback loop will signal the release of dopamine and that motivates us to repeat the behaviour. Achievement goals will trigger a dopamine hit if we get the challenge/reward balance right, but your brain could find creating habit changing goals more appealing. For inspiration in this area, check out Skodel’s list of goal suggestions.

Bonus tip (identity goals): When setting a goal, your focus should be on who you want to be, not what you want to achieve or change. For example, I want to be the person that is active and trains three times a week. Ask yourself, who do I want to be, and make that your goal. Your behaviour will change around that.

We track completion rather than effort

When we track completion, it produces another binary outcome as we either do something or we don’t. This creates accountability and responsibility which can be helpful but also stressful. It might be motivating in the short term but it can wear our system down over time. Chronic stress will decrease our brain’s sensitivity to dopamine. It isn’t a good long term strategy to use stress and fear as the primary sources of motivation, these signals were designed to provide short but intense responses to perceived threats. In the event that completion is obtained, the intensity of it will likely encourage us to never do that again. Our brain won’t like setting goals that put our body through this for an extended period of time, unless the reward is immense.

An alternative to tracking completion is tracking effort. The way we think about the success of a goal can impact how dopamine and stress among other things are signalled. If you think about success as the completion of a goal as opposed to your effort level then different parts of your brain will be signalled. Ultimately, your motivation and stress levels can be altered by altering your perspective of success. While high levels of accountability can motivate, your brain could be more receptive to thinking of success as effort rather than completion. And… in the end, the likelihood of ‘success’ could also increase!

The reward doesn’t justify the sacrifice

We have muddled ideas or don’t truly know what will help us lead a more fulfilling life. If we don’t connect with a reward then the brain won’t trigger the dopamine required to do it. If the reward is clear, we will put our body through almost anything to get there, albeit to our own detriment at times. The ideal reward is meaningful, challenging and clear with elements of surprise. “If I do this then who knows how good it could be” enhances the release of dopamine and a reward that comes with a challenge is more motivating than one that is easily obtained.

The frontal cortex and dopamine systems are connected. We have a degree of cognitive flexibility to look at the same rewards/goals from multiple perspectives and how we look at these can alter how motivated we are. For example, setting a strength based goal (promoting positive behaviour e.g. eat healthy) is something our brain prefers over deficit based (eliminating negative behaviour e.g. “stop eating junk food” doesn’t always work). From a philosophical standpoint it helps to understand who you are, what you are passionate about and where you want to be/don’t want to be in five years time. This knowledge helps us extract the most meaningful rewards. Coaches and mentors can help here as we are prone to overestimate the value of some things in our lives (a new house or car) and underestimate others (family rituals, daily walks or a good night’s sleep). Our brain will like this if we get the reward right and we notice improvement in our lives, which may not mean the goal will always feel easy but it should feel rewarding.

Bonus tip: Instead of setting a goal to eliminate bad habits, replace them with alternative habits. For example, drink tea instead of red bull.

We don’t feel we are ready to set goals

We might feel helpless and sorry for ourselves. Sadness and in extreme cases, depression, block dopamine which limits our motivation to do anything, much less set goals. It’s perfectly acceptable if you are feeling down, to not feel ready to do this. However, we should consider that setting smaller goals can help and they may not overwhelm your brain. A goal might be to have a healthy breakfast at 9am every morning this week or to book a session with a psychologist. If we make progress here, the dopamine signals can kick in and we can start to reestablish our self-confidence.

Bonus tip: Set goals anchored in existing behaviour. For example, every morning you wake up, you shower and you have toast with butter for breakfast. Your goal could be to spread less butter on your toast or to finish your shower with cold water only. Make it small and achievable.

In summary, here is what our brain does and doesn’t like when setting goals:

If goals feel like a punishment with no reward then the goal isn’t right for you or you are framing it incorrectly. The right goals will feel challenging yet rewarding.

A voice that is heard.